‘DURO,’  short for “Durosinmi” which in English means “wait to bury me,” is a tragic short work about a highly successful young man in a pre-colonial African Society. Duro is not only successful but has an unusual momentum in life, rising fast above his contemporaries. However, a dark cloud hangs over the life of Duro. This, the story seeks to unravel. 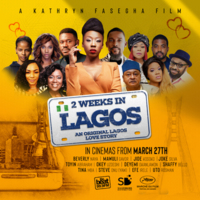 Jonathan Haynes's Nollywood in Lagos, Lagos in Nollywood Films offers an excellent representation of Lagos in Nollywood films, unpacking how Nollywood is geographically and commercially connected to Lagos. Haynes explains Lagos as exhibiting a postmodernist-inflected celebration of the coping mechanisms and creative forms of self-organization of a population whose ability to survive contradicts ordinary common sense.

He envisions the representation of the postcolonial African city in Nollywood as conventionally framed shots of streets and compounds, lavish parlors and ordinary bedrooms, hospitals, and offices in which common desires lard movies with standard images of luxury automobiles, huge houses, and expensive clothes. But what does Lagos look like when imagined through Nollywood paratexts like posters? This exhibition offers a visual representation of the city through recent New Nollywood films that focus on Nigeria's emerging tech hub. 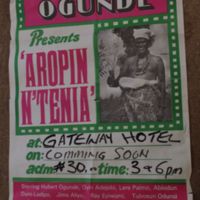 Posters in this exhibition focus on the films of veterans such as Hubert Ogunde, Baba Sala, etc. The travelling theatre was an important form of popular drama that grew out of the traditional Alarinjo mask theatre in Nigeria. Created in the 1940s by the late Hubert Ogunde, it combined elements from the Ghanaian Concert Party, incorporating music, dance and elements from Yoruba religious beliefs.

According to Nollywood scholar, Jonathan Jaynes, the travelling theatre has been wildly popular with Yoruba audiences and draws crowds even in non-Yoruba areas. It is known as the Yoruba Travelling Theater because none of the troupes had a fixed home: they travel constantly, performing in rented halls or wherever they can (1).

The films in this poster exhibition draw substantially from the travelling theatre tradition and mark the transition from the celluloid technologies used in Nigerian cinema in the before Nollywood to films that were shot straight to VHS cassettes.